With prayers and our gratitude, today we bid farewell to His Holiness Benedict XVI, Roman pontiff emeritus.  The process to select the new Pope, the Successor of Peter and our Vicar on Earth, should continually influence us into active prayer.

Lent is a profound time of grace and reflection.  It invites us to open our hearts, minds, & bodies to the grace of rebirth.  Certainly our Cardinals gathered in Rome with the responsibility of electing the next Pope will rely on this season of grace as they take on this holy task for our Church, for the world, for you, our children, and our future.

As God’s co-workers and disciples, we are called to share in this responsibility by praying for His Holiness Benedict XVI, praying that the Holy Spirit might enlighten the College of Cardinals, and praying for the future Pope.

We have posted some prayers for your use and will continue post updates and offer additional resources so please, check in often.  Your thoughts and/or reflections can be sent to:  cvillegas@holyfamily.org 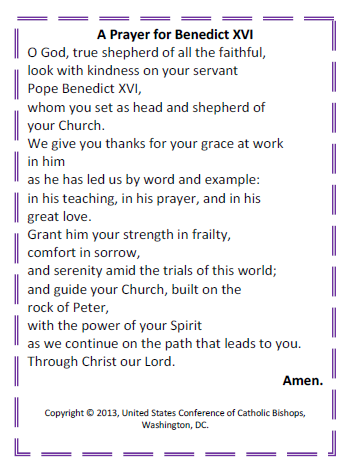 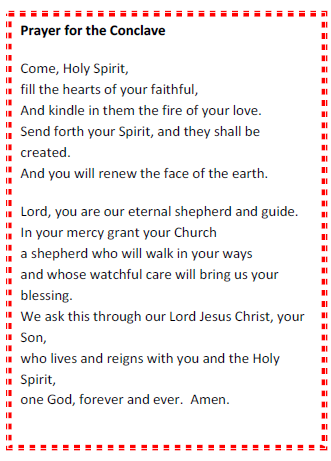 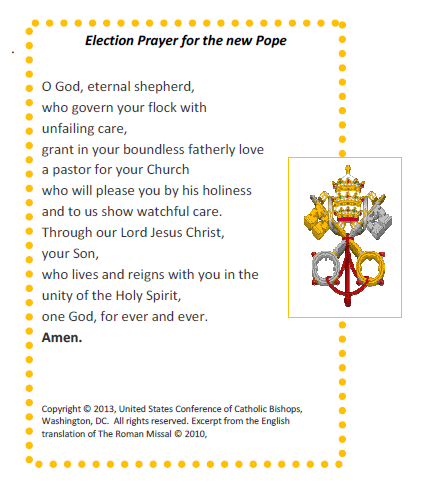 Accompanying a Cardinal with a Prayer Bouquet:

http://www.1conclave.com     Through the website 1conclave you can sign up and be assigned one of the cardinals who is participating in the conclave. You will be invited to pray for that particular cardinal in the days leading up to and during the conclave. In particular that he will make a wise choice, guided by the Holy Spirit as he casts his vote. You can keep track of the prayers you say through the “Spiritual Bouquet” and see how your prayers are added to the prayers of others.

http://www.adoptacardinal.org           Unlike 1conclave, this website doesn’t give you counters for your prayers; it simply assigns you a cardinal and invites you to pray for him.

Questions You May Be Asked and helpful resources:

What does the Pope do?  Not everyone understands what it is that the Pope does or why electing a new Pope is such an important act for the church. Here is a brief video that explains what the Pope does. It was made when Pope Benedict XVI was visiting the United States, but the core information is still valuable. There are also children’s books and videos available.

Why did the Pope resign? On February 10, 2013 Pope Benedict stated:  “After having repeatedly examined my conscience before God, I have come to the certainty that my strengths, due to an advanced age, are no longer suited to an adequate exercise of the Petrine ministry.”   Think of a time in your own life when you chose to step back from a job or volunteer commitment.  You could use your experience as an example to help your child understand the Pope’s decision.

What is the Pope to be called now?  Pope Benedict XVI will now be known as “His Holiness Benedict XVI, Roman pontiff emeritus.”  Emeritus means having retried but retaining your title as an honor.  Here at Holy Family, Msgr. Connolly’s title is  “pastor emeritus” because he retired from being our pastor, but we honor all that he has done and continues to do for our community through his title and priesthood.

Where will the Pope live? His Holiness Benedict XVI has retired to his summer home in Castel Gandolfo, in the hills outside Rome, before moving to the Mater Ecclesiae convent, a plain, four-story structure built 21 years ago to serve as an international place “for contemplative life within the walls of Vatican City,” as it is described on a Vatican Web site.

Who is in charge of the Church now? Until a new Pope is elected, the Pope’s deputy, Cardinal Tarcisio Bertone will be in charge. He will govern the Church with the College of Cardinals and will oversee the election process.

How is the new Pope going to be chosen? Vatican Insider has an excellent series of graphics that show how a Pope is elected. Each graphic also has click-ables that give you more information.

What happens once the new Pope is chosen? The newly chosen Pope will consent/agree to be Pope. He will then be asked to choose his new name (Joseph Ratzinger chose Benedict XVI – meaning that 15 popes before him had chosen the name Benedict). Then he will be fitted with his papal robes. Finally, he will step out onto the balcony of St. Peter’s Bascillica and address the crowds. Some of your children were too young to remember the election of Pope Benedict XVI. To give them an idea of what will happen when the new Pope is elected here is a short video.